This news is viral in Whatsapp groups. It has become trending news and remains trending up to

Some might have seen this clipping. But this is for the sake of our community, who have not seen yet.

The real news will be known only on August 15.

Let us wait and see.

Hon’ble Prime Minister has instilled confidence in the minds of old EPS 95 pensioners.

*On August 5, 2021, under the initiative of Smt. Hema Malini ji, National President of NAC, Commander Ashok Raut, who is fighting for the welfare of EPS95 pensioners, met Hon. Prime Minister in the Prime Minister’s Office along with the delegation of NAC. He submitted a memorandum regarding the 4-point demands to the PM.

Referring to the pathetic and dying condition of EPS 95 pensioners, Commander Ashok Raut, voiced a concern over the increasing mortality rate of pensioners, requested to approve  the demands of the pensioners and prayed for an announcement on 15 August 2021. This, he opined  would end the 957 days old chain hunger strike at Buldhana, the NAC Headquarters Buldhana,

Hon. Prime Minister said that “We have already discussed this topic with the NAC delegation earlier . The process of solving the problems takes some time but you people do not get upset. We will definitely solve this problem”.  Saying this, he directed the Minister of State for  Prime Minister’s Office, Dr. Jitendra Singh, to discuss the matter in details with the delegation and concerned Ministries.

* According, a meeting of the delegation was organized with the Finance Minister, Mrs. Nirmala Sitharman ji.

* In the presence of Dr. Jitendra Singh ji and Mrs. Hema Malini ji, the National President of NAC requested the Finance Minister that how would the EPS 95 pensioners survive in such a low pension amount?  Referring to this, he said that our four-point demands should be fulfilled soon.Increase the Govt. contribution as in other pension Scheme. The EPS 95 Pensioners in the country should be saved and their dignity be restored.

* The Finance Minister listened very carefully to the delegation.

* The NAC President thanked everyone and once again requested for an early decision.

4.Non EPS 95 retired employees may be included in the scheme or approve Rs.5000 monthly pension etc. in this monsoon session of Parliament.

But one thing is true. The NAC is doing its attempts and meeting the relevant ministry. From the available sources, this site understands it may take some more time.

4 thoughts on “Eps 95 pensioners may get good news shortly” 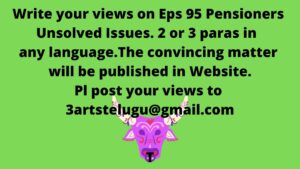